We just wrote about what a great continuous topside monitor the RKI GX-2012 is. Apparently the word is already on the street. This photo was taken in downtown San Francisco recently. And while all we can guess from this photo is that there may be some vacuuming going on down in that confined space, we are heartened to see they are using not only the reliable RKI Instruments GX-2012, but they are also protecting the area with one of our Allegro Manhole Guard Rails. 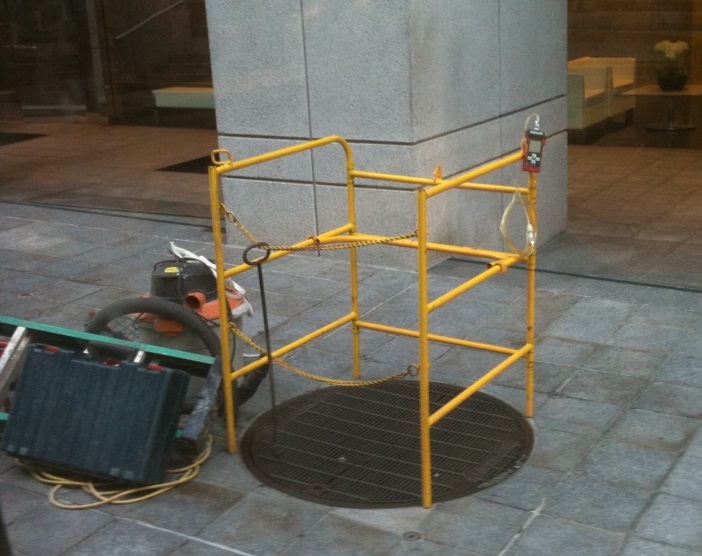 Safe confined space entry procedures call for a reliable 4-gas, pump-enabled monitor like the the GX-2012 for testing the air in the immediate entry area, but workers going below who may be going further down into the space should also be wearing or carrying a diffusion monitor. RKI's GX-2009 is ideal for workers making the confined space entry, not only because it's so small and light (only 4.6 oz.), but also because RKI sensor technology is known for its reliability.The two monitors working in tandem create what is known as the "Active-Passive System" of gas monitoring. The diffusion monitors are with the workers in their specific work areas. Micro atmospheres can be encountered that differ from the rest of the confined space because of the shape of that specific space - trapping gas - or there may be an area that is producing hazardous atmospheric conditions - such as an area with a combustion engine producing exhaust and displacing oxygen.There are so many things that can go wrong in a confined space, but they usually don't. The fact that confined spaces are so often benign lulls workers into a false sense of security. Gas monitors, especially when working in tandem like we have been talking about, are paying attention even while workers are concentrating on their specific tasks, and not on the suitability of the area they are working in. Nobody (well, few of us) want to spend all day in a dark, cramped, often smelly confined space. Workers get in to complete a specific task, and are anxious to get back into the open air. Proper monitoring is able to provide an early warning system for workers when they use them correctly.If you see gas monitors being used out in the wild, or your team is taking them into confined spaces, snap a picture and send it in. If I can use it I'll send you a PK Safety hat (quantities are limited). Thanks for reading and keep monitoring!