Spiderman is washing windows. And he's doing a great job. According to an ABC News report, employees at the Chicago-based American National Skyline window cleaning company came up with the idea of donning superhero outfits as a way to entertain the kids at the children's hospitals where they rappel down the buildings while cleaning the windows. 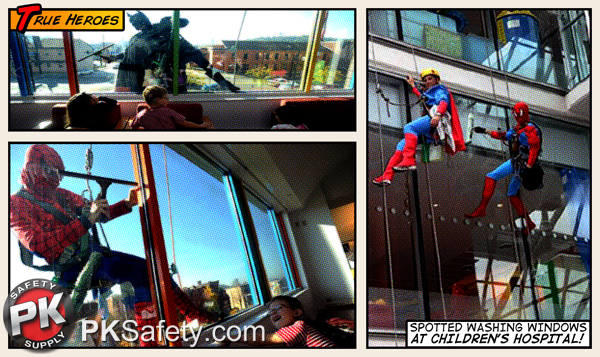 This story was picked up by the major news outlets and the idea has now grown to several other cities. When you see the pictures of these tough blue-collar guys suiting up in their superhero costumes then later waving to young kids in hospital gowns from outside their hospital windows, you are going to swear someone in the room has been cutting onions.

The window washers in Memphis work 12 stories up, so their safety gear needs to be top-notch. From the pictures we can see they are wearing Petzl Harnesses which provide superior comfort when working for long periods of time at height. Different companies use different rope access arrangements, but it's also common for window washers to use parallel secondary fall protection consisting of a Vertical Lifeline and Rope Grab.

Whatever equipment they are using, these guys are using their safety equipment in a way that is really making some kids happy. With great safety comes great responsibility. Or something like that.