Klein Tools has been manufacturing tools for professional tradesmen for a very long time. And that might be part of the problem. Tower erectors, electricians, and telecom workers use their Klein tools every day, but the manufacturer and the users have very different names for the same products.

For example, here at PK Safety we sell Klein Chicago Grips with about 50 variations in jaw shape and cable size accommodations. Chicago Grips? "What are those?" you might ask. My friends at PG&E had no idea what I was talking about when I mentioned them. After I had explained the tool in great detail, they said "Oh! We just call 'em Kleins," like they were trying to explain something to a 5-year-old. 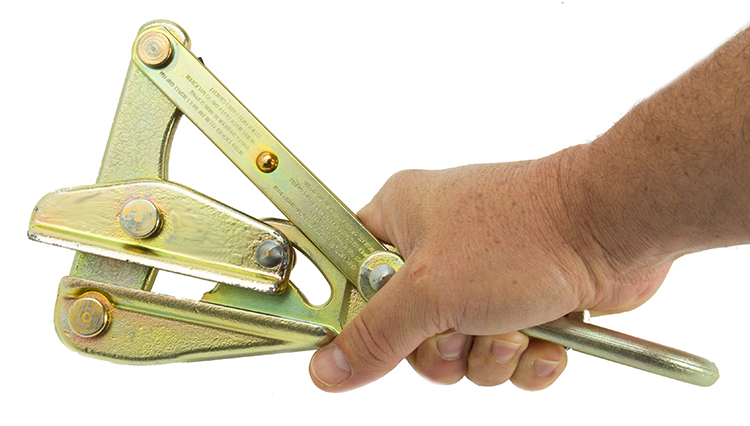 And that would be fine if the cable grips were the only thing my hard-working friends called Kleins. But a lineman also calls his D2000 pliers "Kleins." Or maybe he calls them "D2000s." What he never ever calls them are High-Leverage Side-Cutting Pliers. You know, their real name.

Further research reveals that Kleins (meaning Chicago Grips) are called lots of different things by the people who really use them. They're pulling guy strand, EHS, messenger cable - at least we can all agree on those words. But they're using bulldogs, line pullers, cable pullers, or plain old grips.

Whatever people call them, if they came from Klein Tools these line pullers (There, see? I'm getting it.) are made of forged bar steel. There are a bunch of cheap Chinese knock-offs out there on the market, and if they break, duck quick. Low-quality grips do break. Klein tools are far more stable for one big reason: Klein uses a scanner that basically x-rays each grip to check for structural integrity before it leaves the factory. I'm betting dollars to donuts everyone would prefer to have a tested, well-made bulldog (line puller, grip, thing) holding onto that wire than a cheap, knock-off tool. Especially considering the wire will be whipping by your head like a 50 ft. cheese slicer if the grip fails.

The point here is, whatever you call them, if you're looking for reliability and craftsmanship, you can trust Klein Tools.