We've all heard tests of the emergency broadcast system over the TV and radio. The long monotone and subsequent beeps of digital information being transmitted are generally followed by an announcement that this was a test ("This is only a test"). Last night as I listened to the baseball game, I heard my first real emergency broadcast. 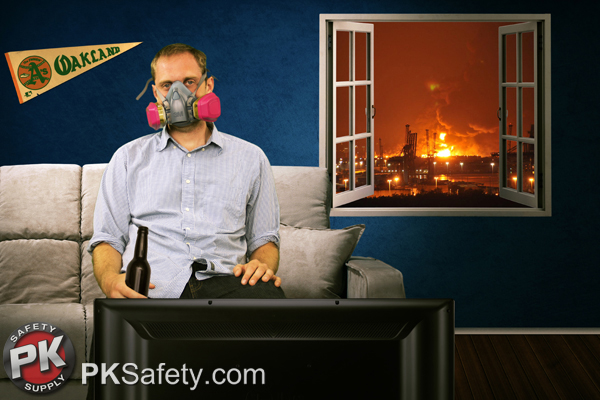 The announcement directed residents of several counties in the Bay Area, including mine, to shelter in place. The Chevron refinery in Richmond, one of the largest refineries in the nation, was on fire.

Looking out the back door I saw plumes of black smoke like a bruise across the sky. Later Chevron revealed sulfur dioxide, nitrogen oxide, hydrogen oxide, sulfuric acid, and nitrogen dioxide were all released into the atmosphere by the fire and damage to the facility. The clouds of smoke drifted out over the Bay, and not particularly in my direction, while specially trained fire crews fought to contain the blaze.

Let me tell you, sitting in the house during a "shelter in place" emergency isn't fun. You keep thinking about the big gap under your front door, and the window in the back room that doesn't close all the way. And while you could start taping up the windows with that big roll of duct tape (I didn't), what I was really wishing for was my respirator and a couple of fresh 3M Multi-Gas/P100 Cartridges.

At the time of the warning, there was no word on precisely what was in the black clouds of doom descending upon my house. And it was only last November when a large amount of heavy hydrocarbons was accidentally released and "auto-ignited" from the same plant, so it's tough to know just what you need to be protecting yourself from. That is why the multi-gas cartridge is the one we'd recommend since it protects against a wide range of fumes as well as blocking 99.5% of particles down to 3 microns. That is significantly better than the damp towel I was holding over my face when I had to run next door to check on my elderly neighbors.

The Richmond Chevron refinery produces approximately 240,000 barrels of jet fuel, gas, diesel, and other lubricants, and makes up a significant portion of the company's total domestic production. And while this most recent release of toxins doesn't appear to have caused widespread air quality problems around the Bay Area, it's a good time to consider just what equipment would be best for you and your family to have on hand in an air emergency. A damp old towel is really not going to help.

If you have questions about respirators or the right filters and cartridges to use in an emergency, please call us, or contact us online at pksafety.com.