RAE Systems is the manufacturer of the QRAE 3, the newest multi-gas monitor for confined space entry. Up to four sensors can be configured in this device for combustible gases (LEL), Oxygen (O2), Carbon Monoxide (CO), Sulfur Dioxide (SO2), Hydrogen Sulfide (H2S), or Hydrogen Cyanide (HCN) depending on the specific needs of your facility. 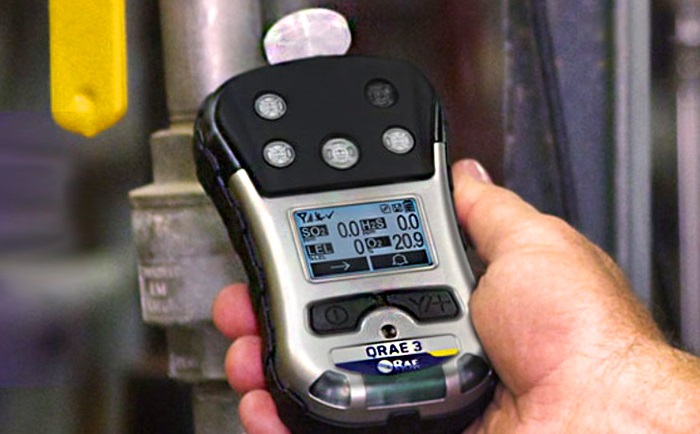 The interesting thing about this monitor is the wireless configuration option. RAE Systems says this device will work in confined spaces as well. For companies working deep underground there may need to be some relays involved. But generally speaking, they say this unit can handle quite a bit of obstruction.

Ordered with the optional internal wireless radio, it can reach up to 650 ft. (that's going to be open space, and not a concrete bunker) to a RAELink3 Mesh reader which connects to a PC. This simple system enables a central command unit or other safety team members to monitor readings on the QRAE 3 from a distance. With traditional ProRAE and AreaRAE setups, the QRAE3 can use a RAElink3 mesh radio link and communicate the monitor as long as it was within 30 feet. The radio link could then translate it over several miles to the command unit.

Remote safety workers are not only able to monitor gas levels, but are alerted when the QRAE 3 goes into alarm, or when the user has not been moving for a 20-30 seconds (and this amount of time can be adjusted through the interface). This feature is called the Man Down alarm and is something that has been incorporated into the MultiRAE Lite, the MultiRAE, and the MultiRAE Pro devices as well.

The Man Down feature is something firefighters have been using for years on their air packs. In an industrial setting, it's an idea that makes immediate sense to those working in the field. It's something you can use or not depending on your needs, but it does come standard with the QRAE3 device.

Like the MultiRAE units, the QRAE 3 has the pump inlet at the top of the instrument. It's also the same shape as the MultiRAE. The button configurations is the same as well. So if you're familiar with one interface, you're basically ready to deal with any of their newer monitors.

This device comes with a rechargeable battery. With a diffusion configuration the batteries will last for about 14 hours. If the internal sample pump is being used, the run time will be cut down to about 11 hours. Rechargeable batteries help to minimize the down-time you experience with an instrument, so they are very desirable. The QRAE3 only comes with this feature.

The display screen is fairly good sized. The screen is back-lit when entering you hit a button. On the back, a strong alligator clip allows for a sturdy attachment. There is also a D-ring if you have a clip on your belt or a carabiner for the unit to attach to. An easy-to-use interface allows users to scroll through the peak readings, the STELs, and the time-weighted averages. Datalogging, as with most devices in this class, comes standard. The pump has a water and dust filter and will go into alarm if the air intake is blocked. The alarm can be cleared easily once it is fixed.

The QRAE 3 extends the utility and safety of the RAE Systems gas detector line. The QRAE 2 has been one of the most popular, cost-effective monitors we have ever sold here at PK Safety. We see this new monitor incorporating all of the best parts of the old version while integrating the more sophisticated wireless capabilities of their higher-end devices. Eventually all personal and fixed gas monitors will be able to send information quickly and effectively to all team members. The QRAE 3 is a big step in the right direction.