I’m fascinated about the basics of atmospheric monitoring, how to change the air in a confined space by supplying ventilation, and effective uses of ducting. Aren’t you? Relying solely on your nose (no matter how magnificent it may be) is not the right method to detect airborne hazards. Many gases dull the senses over time, and only a proper gas detection unit with a test probe can properly asses the atmosphere of a confined space. 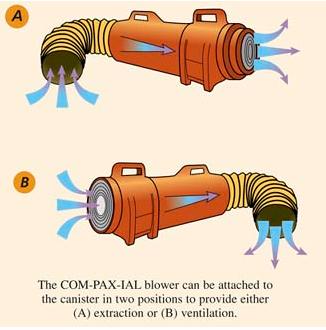 The shape and location of many confined spaces make them more likely to retain dangerous atmospheres.  Confined spaces are also relatively difficult to ventilate and require specific procedures to properly cycle the air and make it safe for workers to conduct maintenance or inspection.  Oxygen deficient or oxygen enriched atmospheres are a hazard in confined spaces, as are other flammable or toxic gases that may settle in the confined space, or result from the work being completed within them.

Because many of the dangerous gases are heavier or lighter or even the same as air, rescuers should use gas monitors with a remote probe to test the space in at least three levels: the top, middle and bottom levels of the space. A gas monitor with an internal pump or a monitor and hand pump with tubing should be utilized to test the different levels of each of these atmospheric zones.  Methane is an example of a lighter-than-air gas, and will generally rise to the upper limits of a confined space; carbon monoxide is almost the same as air and so can collect in the middle of a tank or silo, and hydrogen sulfide is an example of a dangerous gas that is heavier than air and can pool in the bottom of a confined work area.

To ventilate a confined space, axial fans which force air to move parallel to the shaft are ideal.  The fan used should be intrinsically safe, meaning it is designed so all electrical and thermal energy remains low enough that ignition of flammable or combustible gases cannot occur.  The fan should also be properly grounded.

To make a confined space safe for workers to enter, the goal of ventilation is to turn the air over as many times as possible pushing out the unsafe air and replacing it with a breathable atmosphere.

The easiest way to provide fresh air to a confined space is to force air into the area by “supply ventilation”, also known as “positive-pressure ventilation”.  Ducting must be of a correct length to ventilate all parts of the confined space.  Ducting that is too short runs the risk of forcing some, but not all the toxic fumes from a space.  The air being forced in creates currents that keep lower atmospheres in place.  This is known as a short circuit.

In a deeper space, longer ducting will be more effective.  When supplying air for ventilation, be especially mindful that you aren’t re-circulating the bad air back into the confined space.  This occurs when the hazardous air leaving the space is picked up by the fan and again forced into the space.  To prevent recirculation of contaminated air, position the fan intake upwind of the confined space entry point.  Also consider using additional ducting on the intake side of the fan to move the air supply further from the entry point. For more information on specific ventilation products, visit pksafety.com.

Another effective technique to aid in removing air from a confined space is to open any additional ports or openings in the silo or tank while ventilating - even small ones will help - to allow the air inside the space to escape.

Once several complete cycles of fresh air have been determined to have entered the confined space, retest with your gas monitor to ensure no short circuit of airflow has occurred.  Once inside the space, workers should continue to monitor the air, especially if welding or activities that may produce dangerous atmospheres are being performed.  If an alarm sounds, workers should leave the area immediately, and reassess the confined space atmosphere from a safe distance.