California has a history of wildfires caused by windstorms blowing trees into power lines. This year, multiple wind-driven wildfires moving through California have affected thousands of people living and working in the area. For example, the most recent Thomas fire has burned 270,500 acres. It's only about 60% contained, according to Cal Fire. The fire threat is still in effect in Ventura and Santa Barbara counties. Currently, 17,000 people are under mandatory evacuation orders in Santa Barbara County, and another 30,000 people are in evacuation warning areas, according to Santa Barbara County Sheriff Bill Brown, who states that public safety is the primary reason for ordering evacuations.

Smoke containing hazardous particles produced as a result of burning wood or plastic is a serious threat to the respiratory system. The NASA satellite captured an image of smoke blowing offshore, covering Channel Islands National Park, Santa Rosa Island and even a small island of San Miguel. According to NASA, there aren't any signs of relief so far, because of low humidity and no-rain weather forecast in that area, as well as high winds.

Per KSBY news, the smoke impacts are greatest along the coast from Oceano Dunes/Nipomo to Morro Bay but could deteriorate rapidly in other parts of the counties as the smoke plume moves inland. The air quality index (AQI) and the level of smoke and ash in the air are very dependent on the weather and winds. For Thomas Fire updates, please visit Santa Barbara County's website and Ventura County's emergency page.

High winds are always a red flag to utility companies, first responders, and firefighters. To stop fires, preventative power shutoff is usually performed in extremely high-wind areas. Here are some safety tips from SCE that will help you avoid accidents during power shutoffs and outages: 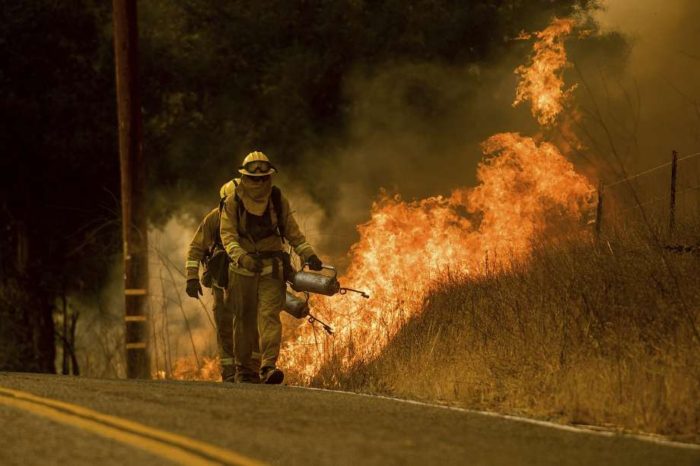 Cal Fire has not officially announced a cause of any of the blazes that have ravaged both Northern and Southern California this fall. According to the California Public Utilities Commission, authorities are still working on determining the sources of ignition, and are looking into whether California electric and telecommunications utilities had properly maintained their equipment in the fire zones.

Even after the fire is put out, serious health threats still exist. Personnel performing damage assessments and repairing fire-damaged equipment, emergency crews, and people that have not been evacuated from the areas affected by fires have to wear respiratory protection and proper safety clothing to stay safe. For instance, people that are cleaning up the ash, soot, and dust should always wear N95 masks, safety eye protection, long-sleeve shirts and jackets, and long pants. When being outside at night, put on hi-vis clothing to be more noticeable in the dark and in the reduced visibility conditions.

For those who might need an advice on what to wear while working in the wildfire-affected locations we offer a free consultation. The occupational safety products that we provide have helped many people to stay safe while working in hazardous areas.

Our 70-year expertise in occupational safety allows us to quickly find the best solution for your particular application. Call us at 800-829-9580, or visit us online pksafety.com/.

Read more about fire safety in our previous blog posts:

Northern California Wildfires: How to Protect Yourself From Smoke and Poor Air Quality