Don't forget your jacket and your face mask. These words are more likely than ever to be spoken as people leave the house in major cities in China and other industrialized cities around the world these days. As air pollution degenerates further and further, lung protection becomes important not just for those working in factories and other places with dirty flying particles, but simply for day to day health in cities like Beijing, with over 20 million people. 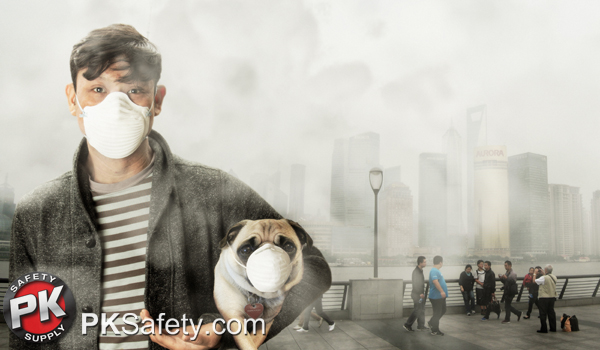 According to an article from Reuters air quality in Beijing recently hit 993 micrograms per cubic meter. The World Health Organization has set a safe limit of about 20 micrograms per cubic meter. To give a better idea of what the Beijing number means, cooking with biomass fuels or coal in your small, poorly ventilated hut will produce a similar level of particulate matter. If it has been some time since you last cooked with coal in your house, believe me when I say it gets a little thick.

Serious health issues can be the result of long-term exposure to these particle levels. This is especially true with the young and the elderly whose systems are less able to recover from the toxic atmosphere. The elderly are more susceptible to cardiovascular disease while the youth are experiencing a dramatic rise in asthma rates. Overall mortality in cities with very high particulate matter pollution has been shown by the WHO to be 15-20% higher than relatively cleaner cities. In major cities in Asia the WHO estimates these premature deaths to be over 530,000 per year based on reports from the U.S.-based Health Effects Institute.

In response to these conditions, many Beijingese are regularly donning disposable respirators. And while some face mask models are incorporating fashion, many residents are going for a mask that will provide the greatest protection such as the Moldex Premium Particulate respirator which is rated N99 - removing 99% of particulate matter .03 microns and larger.

Lung protection when living in this level of pollution over the long term is more of a necessity than a luxury. Until countries and cities can find a way to reduce levels of particulate matter and have generally cleaner air, conscious use of disposable or reusable lung protection will be more and more important for the health of those who live in dangerous air environments.