Residents of the areas affected by Hurricane Isaac could see (or at least hear) greater numbers of mosquitoes and have increased exposure to the West Nile virus soon according the Centers for Disease Control and Prevention (CDC). The recent Category 1 hurricane, while lacking the raging winds of faster-moving storm systems, brought wide-spread flooding and that flooding may create expanded breeding grounds for mosquitoes. 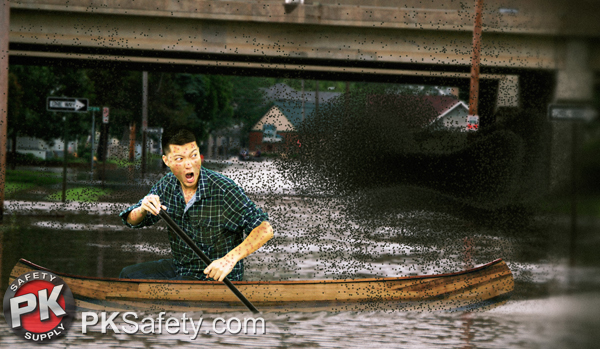 Floodwaters initially washed away areas of standing water where mosquitoes laid their eggs. However, now that the water has receded, it has left large areas of stagnant water that are prime breeding grounds for the insects, many of which are now carrying the West Nile virus.

Public health officials are encouraging residents to reduce their risk of exposure by draining all standing water they can find, using a quality bug repellant, and wearing long pants and sleeves at dusk and dawn when mosquitoes are most active.

West Nile virus cases reported after the last major hurricane, Katrina, increased by nearly 200% in the affected areas of Louisiana and Mississippi. The CDC is taking no chances with this latest weather event, and has offered technical assistance to municipalities in the hurricane zone.

To protect residents from mosquitoes carrying West Nile, the Environmental Protection Agency (EPA) recommends insect repellant with DEET. DEET has been tested by the EPA and has been shown to be the most effective protection against mosquitoes available. It has been approved for use on children as young as 6 months, but should be applied carefully and sparingly. Insect repellent should never be sprayed on the face, but applied to hands, and then wiped on the face.