Harnesses are made to protect you in the event of a fall. But they're not made to protect from multiple falls over time. That won't stop workers from suiting up for work today wearing their "lucky harness" that saved them last June.The problem is, that lucky harness isn't going to be so kind the next time something happens. According to Miller (now under the umbrella of safety giant Honeywell), harnesses have about a 5 year life expectancy from their first date of use even if they never experience a fall. Modern fall protection harness have fall arrest indicators in the form of a tag or perhaps red stitching that is revealed after a harness is involved in a fall serious enough to tear the sacrificial webbing. Parts of many harnesses these days are made to release under fall forces and help to alleviate the pressures acted up on the body of the worker. 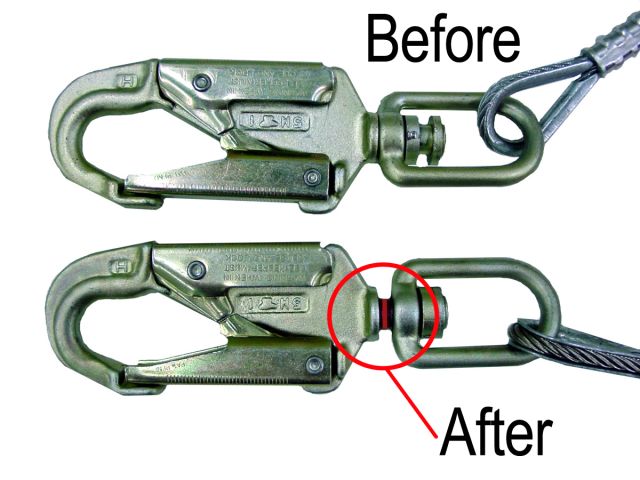 The problem is, once that stitching is torn, there isn't another bunch of stitching to tear next time. Rick Pedley, owner of PK Safety relayed a story to me while I was wandering the halls asking folks for a suitable blog topic.

Back in the day, before full-body harnesses were standard issue for fall protection, guys wore safety belts. "Not the two inch belts. No. We recommended the more comfortable and safer 3 in. belts," he said, raising his eyes as if to say "That was safety then. What are you going to do?" Manufacturer representatives would come by to show us the latest gear, and provide a demonstration by dropping a 200 lb. dummy with the belt hooked to a lanyard.

After the fall, the rep pointed out a rivet that had been bent where the buckle locked in place on the nylon belt. "Now I'll show you why we take these out of service after a fall," the rep had said. He proceeded to hook up the weighted dummy and do the test again. Remember, those body belts were acceptable fall protection until January of 1998. (Internal injuries were just a part of the program, apparently.) The second time the sales rep did the test, the prong of the belt ripped through the grommet then through the nylon webbing past three more grommets before stopping.

The point of this story is, safety equipment is designed to save you from a fall. It's not made for multiple impacts. The same is true for self-retracting lifelines and lanyards.

OSHA requires fall safety equipment to be removed from service immediately if it has been subjected to fall impact. Workers are not allowed to use it unless and until they have been inspected by an OSHA-defined Competent Person and deemed undamaged and suitable for use. If you have had a fall and are still working, you can thank your own intelligence for wearing the proper gear. But don't get nostalgic and keep that harness in service. If it saved you once, go buy another one just like it.