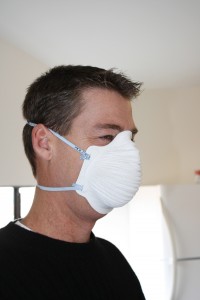 The Airwave disposable respirator by Moldex is one of those exceptional and delightful instances when a change is an actual breakthrough, like the first jet aircraft or nuclear submarine. In the world of disposable respirators, the Airwave is at that level of world-changing event. Not only does it promise greater breathability than a valve respirator, it is also much cheaper and easier on the person wearing it.

The statistics tell the story. Notice its cool accordion shape? Its Flexfit design acts like a spring that expands when you move your jaw, which keeps a good seal over your nose and mouth along with making the mask more comfortable. Safety gear is the best when it is so comfortable that you forget it’s on. But within that fancy looking form lies double the surface area of a normal respirator. It doesn’t just look neat, it is giving you twice the number of ways to get air in and out of the filter area. In comparison to a valve respirator, the Airwave boasts a whopping 68% less inhale resistance and 51% less exhale resistance. In comparison to non-valve masks, the Airwave gets 65% less inhale resistance and 68% less exhale resistance.

Basically, these numbers mean the mask is twice as easy to breathe through as anything else out there. As for why this matters, think about how mountain climbers sometimes need oxygen tanks, because the air is thinner at high elevation. Or, in a less extreme scenario, how jogging somewhere that is high above sea level is tougher than at a lower elevation. How alert and energetic you are depends upon how much oxygen you are drawing into your body. While a regular dust mask is safe, it can gradually tire you out for this very reason. Less air is going into your body than it would with normal breathing. The Airwave helps increase productivity by fighting against this fatigue and at a cost that is far below a valve respirator. Its greater surface area also eliminates the buildup of moisture within the mask

So let’s review: the mask has twice the ventilation of anything else out there, costs a fraction of valve masks, and stays dry inside better than anything else. PK is happy to sweeten the deal on the Airwave disposable respirator by offering ten percent off a box of ten when you enter the code AIRWAVE10 between now and January 22, 2012. There is still time to add this to your list of resolutions.