A friend recently nudged my shoulder and pointed out a mother and her baby who were in the stands with us at an Oakland A’s baseball game. He rolled his eyes. The baby was wearing earmuffs.

"Our parents never did any of that stuff," he told me with a smug look. "And we came out just fine." He and his giant foam finger turned back to watch the game. 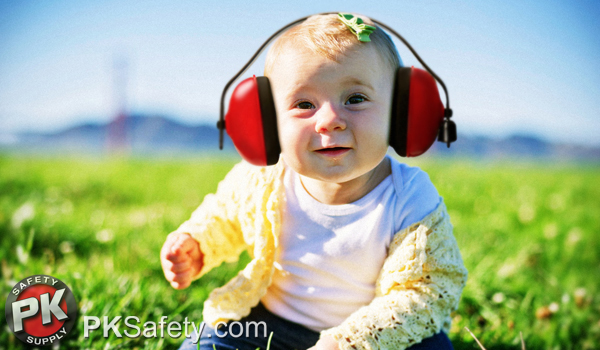 Suddenly outfielder Yoenis Cespedes hit a towering home run to center field and we jumped up out of our seats and started shouting with the rest of the fans. The roar of the packed stadium went on for several seconds.

If that baby didn’t have hearing protection, chances are attending one sporting event wouldn’t be a problem. But those parents had embroidered jerseys, blankets, even seat pads for goodness sake. Before I noticed the plastic lanyard with their special passes around their necks, I could tell: Season Ticket Holders.

Hearing loss from exposure to very loud noises is irreversible. It's also cumulative, so the more times a young child is exposed to the noise from an Oakland A’s home run (hopefully very often, in other words) the more potential there is for hearing loss.

NIOSH is an agency that studies these things. The National Institute for Occupational Safety and Health reports that more than 15 minutes of exposure to noise over 100 decibels will begin to damage the ear’s ability to hear. And it’s even more dangerous for children than for adults.

Aside from the fact that infants may perceive a sound as much higher - up to 20 dB louder - than an older child or an adult (NYT), young kids can’t always articulate the fact that their ears are hurting them. And they often are not able to get up and move away, especially in the fully strapped in, rocket-to-the-moon, 5-point harness/car seat/carriers people use to transport small children.

Parents who want to protect their kids' hearing might be in for some funny looks, like the one my friend gave. But awareness of this issue is still not great, and there is a stigma in looking different or being the only one with hearing protection on.

Earplugs aren't recommended hearing protection for very young children. They are too big for a small child’s ear canal, and also pose a real choking hazard. It probably doesn’t help that earplug like the Howard Leight Max-Lite Disposable Earplugs look like they might be really delicious.

Earmuffs are a good alternative. There are companies out there who make earmuffs that are specifically marketed to parents of children. But a close inspection will show you that, aside from the ones made for kids under 6 months old, the regular earmuffs and the protection they offer are no different than the ones on our site. The Ultra-Lightweight Earmuff is made by the hearing protection experts at the Howard Leight company and go for around $7. They provide NRR 25 (Noise Reduction Rate), and for that price, you can put your own cute sticker on the outside.

Of course I didn't explain any of this to my friend. It was too noisy.